We’re not sure how to summarize this last year in a way that doesn’t leave out a lot.  So instead of trying to profile the year as a whole we’ll just tell some stories about what happened.

A quick summary on the family: everyone is getting along well.  Barry’s mother Clara is 94 and still in a dementia unit.  She is a happy soul.  Here she is visiting with Barry’s brother Rob: 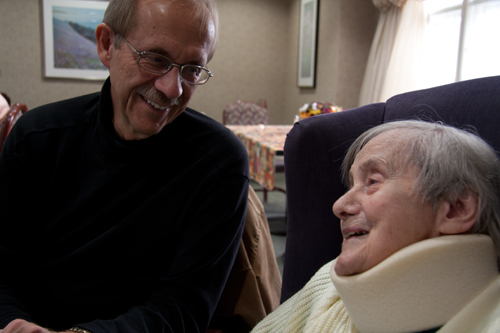 A fall put her in a neck brace which she will have to wear for the rest of her life.  It doesn’t seem to bother her much although the staff keeps a sharp eye to make sure she hasn’t taken it off. She greets everyone with a ‘Hello dear!’ and she means it.  If you’re going to lose faculties, this is the way to do it.

Ellie has continued with her quilting and Barry still takes pictures.  Here is a recent wall hanging she did: 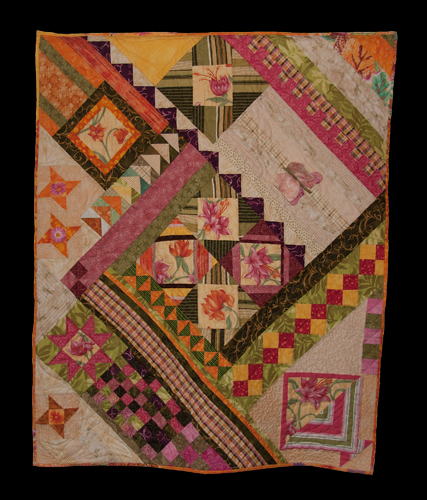 Now on to some stories.  We don’t get away often and then for only a few days at a time but we have enjoyed ourselves.  In April we went to Clifty Falls State Park in Indiana and since it was a special occasion, Barry called ahead to the Inn and asked if they could have flowers waiting in the room.  They said sure, but he would have to take care of ordering them himself.  They provided phone numbers for a few florists and he called the first one, asking ‘Can you deliver 12 roses to a room at the Clifty Falls Inn?’ to which the fellow replied ‘no, but I can deliver 12 quarts of motor oil’ and burst out laughing.  This was an old phone number which now went to a car repair shop and this guy had received similar requests before.  He was ready for us.  Barry thought the motor oil would be unique but maybe not completely appropriate (47 years of marriage will do that for you) and made some more calls.  Flowers were delivered to  the room. 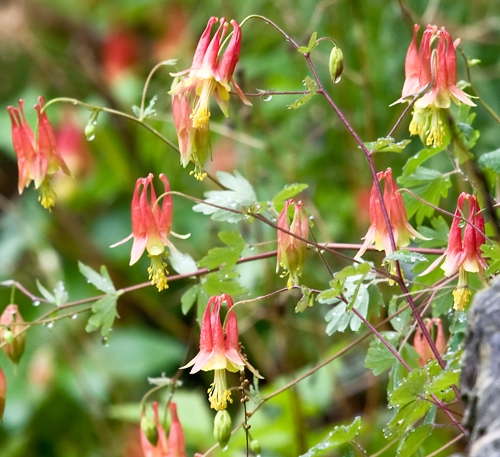 These are columbines from Clifty Falls State Park.

Our friend Joyce is living with us; her house in Downers Grove, IL hasn’t sold yet.  She had cataracts removed from both eyes and had a hip replacement.  She is getting along well.  Joyce’s dog Powder tore a cruciate ligament chasing school buses (she was on one side of the fence and the buses were on the other).  After surgery to repair the damage Powder will no longer be chasing buses although she knows there are children inside the buses who need to be saved.  She has a new strategy.  Powder, Ellie and Joyce were out in the car one day and a school bus pulled up alongside.  Powder barked at it and now has a new way to chase buses!  A car and a driver!  What could be better than that?  Now, if she could only hang her head out the window she would be in business. 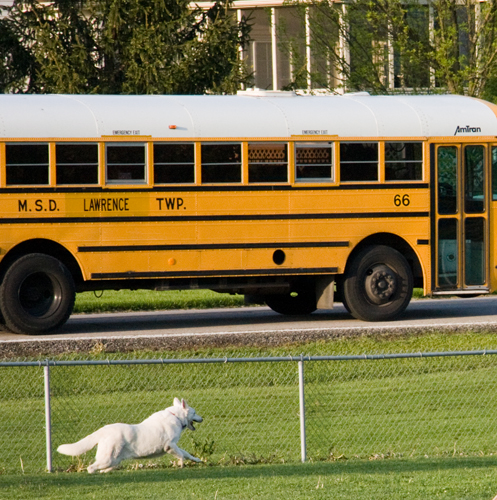 Our dogs have stories too.  Both Prince and Tuck tell us they are not afraid of thunder, they just don’t like it so they get in Ellie’s shower stall when they hear it. 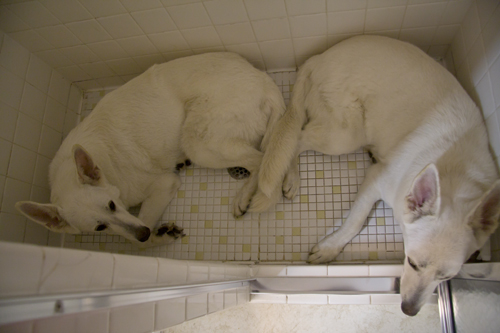 Ellie and Barry went to New Harmony Indiana for a few days in early December.  They were walking along the Wabash river and Barry was setting up his tripod and camera for a picture of a lovely sweep of the river.  Ellie said ‘There’s a bald eagle!’  ‘Where?’ asked Barry.  ‘Right over your head in the tree!’ exclaimed Ellie.  Sure enough, there it was.  Somebody’s powers of observation need a little work. 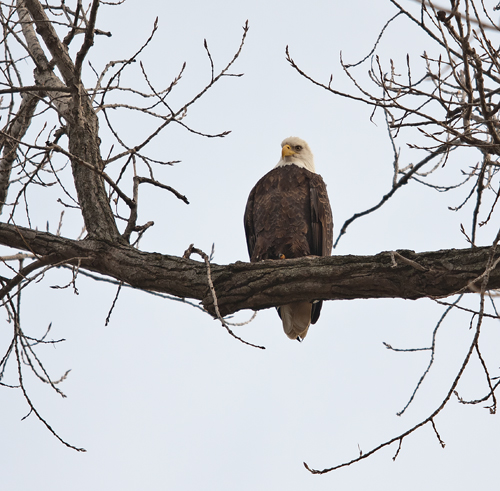 There were other birds in the area as well.

We hope your year had good stories and that they will continue in the coming year.

You can see more of Barry’s work at his blog (which you are reading right now, just go to Home for more).  Ellie’s work?  Well, you’ll just have to come visit.  Our email addresses are elively@indy.rr.com and blively@indy.rr.com.