It has been a year of light and dark in Livelyville. Barry’s mother Clara passed on in July, Ellie continues with her quilting and Barry with his photography.  Ellie is also overseeing remodeling the kitchen.

Barry’s mom, Clara, was the last of the six Dye girls of Hundred WV.  She had spent the last seven years in a dementia unit at Westminster Village North and we couldn’t have asked for better support than that given by the staff.  Mom was cheerful and friendly to all right up to the end. She died at age 95.  Barry wrote about her death in a posting on this blog.  Here she is with Barry’s brother Rob, a few months before she died.

And here, with our father.  We were celebrating the wedding of our son in 1992.

Barry’s brother Rob came to help with final arrangements and to clean up Clara’s room.  The ‘two boys’ as they were known growing up were at it for some time when it came to the last item on the list, cleaning out the books on Mom’s shelves.  There were quite a few books and about this time Rob and Barry were, as Mom would say, planting in clumps.  Two boxes were set up, one for books going home and the other for those to be donated to the Westminster Village North library.  There was an old nondescript Bible that went into the WVN box.  This was toward the end of July.  In the middle of November, Barry heard from his cousin Claudia (Lively side) in Pittsburgh who was wondering if our great grandmother’s maiden name was Riggs; Claudia had been contacted by a genealogist who said that there was a family Bible found in an old folks home in Indiana with the name Martha E. Riggs in the front.  This was the Bible we had donated to WVN.  The Bible had gone to the library and was in turn consigned to the reject bin where it was discovered by the concierge who passed it on to the chaplain.  The chaplain took it home and showed it to his wife.  She has an interest in genealogy and contacted the genealogist who contacted cousin Claudia.  Dumb mistake by Barry and Rob, not opening that book, but think about how it got back to us.  Amazing.  Here’s the inscription on the first page of the Bible.

Ellie’s redo of the kitchen is proceeding apace.  The new cabinets have been delivered and Kevin, who is doing the job for us, assures us all the cabinets (there must be one to two million of them) will all go where they are supposed to and there will be none left over.  We’ll see.

When asked about what should go into this Christmas letter, Ellie immediately said ‘zip line!’  She goes to a Y camp a few times a year for a quilt camp.  No responsibilities for feeding others or doing chores, just quilting, talking, eating and sleeping.  This summer the quilters were invited to try the zip line at the camp and Ellie and her friend Grace jumped right on it.  She called home afterward leaving a message on voice mail.  Barry has seldom heard the excitement in her voice that he heard that day.  She loved it. Here she is with Grace (Ellie on the left).  If you visited us and couldn’t find her, she might be out looking for another zip line. 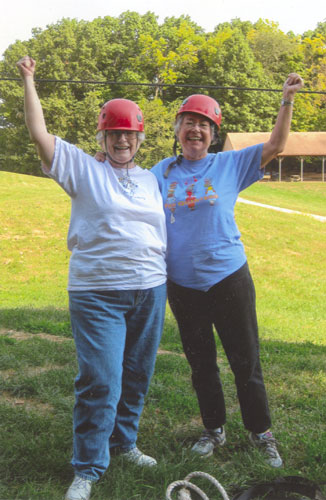 Barry’s photography can be seen in the blog postings here.  Here’s one example:

We are all in good health and hope to hear from you during the year.  Our email addresses are elively@indy.rr.com and blively@indy.rr.com.  Check the main body of this blog for other goings on.